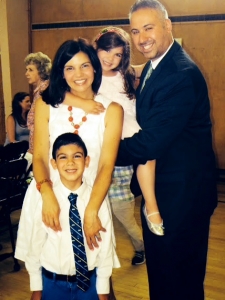 We couldn't be prouder to announce Biagio "Gino" Bello, a top agent from our White Plains office, has been voted Westchester's best realtor by the readers and editors ofWestchester Magazine. Building his career from the ground up, he's accomplished over $150 million in sales to date with an average 98% list to sale price ratio, putting him in the top 1% of all realtors in the county.

We chatted with the White Plains resident and father of two to learn more about his success and what he loves about life in New York's northern suburbs.

HL: Tell us a little bit about yourself. Are you from Westchester originally? GB: I was born in the Bronx - both my parents came from Italy. We lived in a one-bedroom apartment in Parkchester until I was 8 years old, then we moved to Morris Park. I came up here back in '97 to Eastchester, and now I live in White Plains.

HL:What led you to a career real estate? GB: I graduated Fordham as an accounting major and worked at KPMG for about 5 years. Sometime after 9/11, I refocused and realized I wanted to follow the passion I always had for real estate, and just decided to walk into the office of my previous company not knowing a single person and get into the business.

HL: So you had absolutely no connections. GB: No friends, no family-nobody in the industry. My father was an accountant who worked behind a desk his entire career, and I started down that path because I didn't know what else to do. College teaches you to follow a straight path, and I wanted to do something entrepreneurial. Jim Carrey did a graduation speech that went viral on the internet that said, "better to fail at something you enjoy doing than that you don't." So I started literally from the ground up in 2004. Last year I had 74 real estate transactions.

HL: We're told you're a man of many stories. Can you tell us one of your favorites? GB: Well, when I first started out, I knew it would take about 3-6 months in this business to see the first paycheck. It was August, I really didn't have any money coming in and I was getting married in December. We were on and off debating, "well, this isn't going to work." But one day, while everyone else in the office had gone on vacation, I happened to pick up the phone-it was a buyer from the city interested in a $4M listing in Bedford. Long story short, they ended up buying it for $3.5M. And that was the deal that really got me into the market.

HL:What's your favorite community in Westchester? GB: Honestly, it's White Plains. I've been living here for the past 8 years, it's a happening place, it's a millenial place: most of my clients are between 25 and 45, and fresh blood keeps coming into the economy. When I had my first child, I could run to CVS at 2am to get formula. It's a thriving, safe area, urban and suburban and has that "always open" convenience. It's the best of everything.

HL: Can you tell us any good local spots? GB:There's so many different cultures that influence downtown. I'm Italian, if you couldn't tell by name-I know you thought I was Irish at first-but probably my favorite is a Spanish restaurant, Sofrito's. The ambiance, the music, the sangria; it's great.

HL: What was the most challenging deal you ever closed? GB: One of the most challenging things is when a buyer calls and tells me they found a house they love, but they have to sell their current home in order to get it in a short period of time. A client once called about a house in Briarcliff they wanted, but they had to unload their house in White Plains first. I gave them a price for their current home, told them I'd get them an accepted offer in a week-and it happened. There's a lot at risk when you're transferring families in a short period of time and I've worked hard to build the utmost level of trust.

HL: What advice would you give to other agents who aspire to win this award someday? GB: Do this for the clients, not the commission. Follow your passions. If you put your clients first, love what you do and do it for the right reasons, the rest will all fall into place. When I first started in this business, the managers who hired me told me 93% of realtors fail. At the end of the day, everyone should follow their heart. Do that, and you'll be good in the 7%.