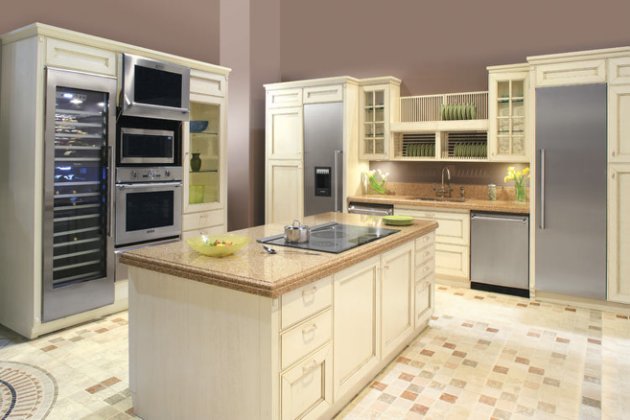 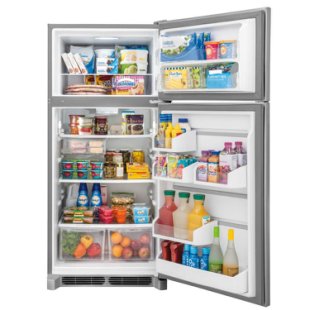 Personalization and customization were among the show's biggest buzzwords. Case in point: Thermador's Freedom Collection of built-in fresh food, freezer, and wine columns that let you "place appliances around the home based on an individual's specific wants and needs," notes the news release. The tall, narrow appliances are definitely high-end, ranging in price from $4,200 to $8,800. Other premium priced appliances with personalization include pro-style ranges from Dacor and Blue Star, both of which can be finished in the color of your choice.

Among entry-level appliances, we liked Frigidaire's new Gallery top freezer, the first of its kind that lets you choose from 100 different organization systems depending on your needs. It also comes with features not common on top-freezers, including LED lighting and smudgeproof stainless steel.

Beyond appliances, Wellborn Cabinet Inc. debuted a butcher block island countertop with an electronic lift that provides multiple height workspaces ranging from lower than a standard table up to 42 inches. If your spouse stands a foot taller than you, you can both be comfortable chopping vegetables during meal prep.

We also saw a lot of personalization in bathrooms, including digital showers from several manufacturers. Kohler's spa-inspired DTV+ system was perhaps the most customizable, with a touchscreen interface that lets you control every aspect of your showering experience, including water temperature and intensity, steam treatment, lighting, and even sound.

Homeowners continue to see their outdoor living space as an extension of the home. An example of this is the rise of the open fire features, which nearly half of all millennials have in their outdoor space, according to new data unveiled at the show by Better Homes & Gardens. We saw countless freestanding fire pits and built-in fireplaces at the show. One favorite: the Wave Fire Pit from the Outdoor GreatRoom Company, with an inrteresting undulating design.

Outdoor pizza ovens are another hot product, especially if you have money to burn. Consumer Reports market analyst Michael DiLauro, our in-house pizza pro, liked the Artisan Fire Pizza Oven by Kalamazoo. He explains why in this video.

We also saw a lot of building products that provide a seamless transition between indoors and out. NanaWall, a leader in the field of operable walls, is joined by major window manufacturers, including Marvin. Check out its Ultimate Clad Multiâ€Slide Door, which can be up to 50-feet wide and 12-feet tall. The door comes either with pocket door panels that disappear into the wall or a stackedâ€panel configuration. California-based manufacturer LaCantina also unveiled its line of contemporary clad doors, whose narrow stile and rail profile and concealed locks maximize glass and light.

Cool stuff to take or leave

No trade show would be complete without lots of gizmos and gadgets that toe the line between novelty item and game changer. Take the PureFresh Toilet from Kohler, with a built-in carbon filter that neutralizes odors, plus an integrated fan that directs the filtered air over a scent pack located within the system.

We also liked the TechTop countertop from LG Hausys, which is basically a wireless charger embedded in countertop material. No more tangled wires taking up space on the kitchen countertop.

The SnapRays Guidelight, awarded the Overall Best in Show award by the National Association of Home Builders, looks like a standard electrical outlet cover plate, but in fact is an LED nightlight with built-in sensors that turn it on in the dark and off in the light.

The Haiku with SenseME Technology from Big Ass Fans is the first smart ceiling fan we've seen. It turns on and off automatically when you enter and leave the room, adjusts fan speeds according to the room's temperature, and even learns your comfort preferences, tailoring fan speeds accordingly.

Lastly, we'd be remiss not to mention the $11,000 coffeemaker seen at the show, called the Top Brewer. The fully connected machine fits under your countertop and is controlled by your smart phone or tablet. All you see is the patented stainless steel tap, which includes, among other things, the smallest milk foamer in the world. The machine even cleans itself automatically after every brew. For that price, it darn well better.