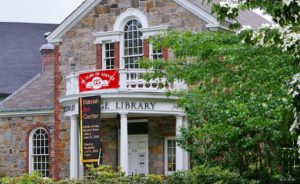 Katonah is one of three hamlets and census-designated places within the town of Bedford, Westchester County, New York, specifically northern Westchester. Katonah was identified as a census-designated place (CDP) for the first time in 2010. According to the 2010 United States census, the CDP of Katonah had a total population of 1,679 people, compared to 10,739 residents of the Katonah ZIP code, 10536. In 2010, half (5,391, or 50.2%) of the Katonah ZIP code’s population resided in the town of Bedford, 36.9% in Somers and 12.9% in Lewisboro.

Katonah, which is unincorporated, does not even have a traffic light. Turning south off Route 35 onto Bedford Road, one soon encounters a broad, tree-lined swath that is part of a historic district listed since 1983 on the State and National Registers of Historic Places. Some houses were moved here from the original site of the hamlet. Others — elaborate Victorian-style “painted ladies” in hues of rose, yellow, lavender and green — were built later. Katonah Avenue runs parallel to Bedford Road, echoing the architecture in its shops near the railroad station.

During rush hour, the train from Katonah to Grand Central runs about 65 minutes.