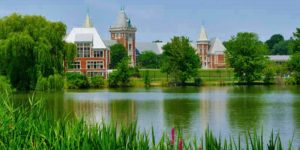 New Rochelle is a city in Westchester County, New York, in the southeastern portion of the state. It is bordered by Long Island Sound on the south, Pelham and Eastchester on the west, Scarsdale on the north, and Mamaroneck and Larchmont on the east. It sits two miles north of the New York City border.

Home to around 80,000 residents across its 13.2 square miles, New Rochelle has nine miles of coastline and a variety of parks and nature reserves. Its established neighborhoods include sprawling residential areas in the middle and northern sections and more densely packed single- and two-family homes in the south.

From its close-knit, tree-lined neighborhoods and re-energized downtown to the estates and clubs of its shoreline, New Rochelle lives up to its nickname, “The Queen City of the Sound.”