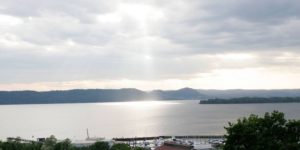 Ossining is a town in Westchester County, New York. The population was 37,674 at the 2010 census. It contains two villages, the Village of Ossining and part of Briarcliff Manor, the rest of which is located in the Town of Mount Pleasant. It is the location of Sing Sing maximum-security prison. According to the United States Census Bureau, the town has a total area of 15.6 square miles, of which 11.7 square miles is land and 3.9 square miles is water. Ossining is bounded to the west by the Hudson River and to the north by the Croton River.

The Town of Ossining comprises two villages: the Village of Ossining and part of Briarcliff Manor, the rest of which is part of the Town of Mount Pleasant. One of the county’s Rivertowns, Ossining is perched on a strand of hills overlooking the Hudson, affording, on clear days,views of the Manhattan skyline. The town retains much of its original character and boasts a myriad of historic sites. Single-family homes comprise the majority of the town’s housing options. Outdoor enthusiasts revel in the town’s Cedar Lane Park, Teatown Reservation, and three boating clubs.

The town of Ossining, perched atop the Hudson River, features an eclectic assemblage of homes, industrial spaces, coffee shops, and mom-and-pop stores. A distinct, popular community among new Westchester residents.

The Metro North ride from Ossining to New York City takes about 42 minutes.