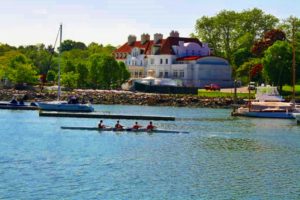 Pelham is an “inner-ring” suburban Town in Westchester County, New York, approximately 14 miles northeast of Midtown Manhattan. Historically, Pelham was composed of five villages and became known as “the Pelhams”. Pelham currently contains two independently incorporated villages: the Villages of Pelham and Pelham Manor— and both are known for their stately Tudors, Colonials, and Victorian homes, with larger estates bordering the Long Island Sound. As of the 2010 census, it had a population of 12,396.

Pelham, located on the southeastern tip of Westchester, is as close as you can get to the Bronx and while still living in Westchester, and, as a result, the town maintains a citified air. As in the City—and unlike in some other towns in Westchester—it’s possible to access many of the town’s resources by walking. Pelham’s downtown village includes traditional mom-and-pop stores, a wide range of delicious cuisine. From its diverse range of neighborhoods to the active waterfront, there is something for everyone in this quaint commuter village.

It’s just 27 minutes from Pelham to Grand Central on Metro-North, among the shortest commutes in Westchester, Pelham is home to many New York City commuters and has an active social community for its residents.